An Otter, the Wild and Coming Change

My phone rings. It’s my friend and colleague Dr Jannes. He has just completed a dive and calls to let me know that the local ‘star’ otter is lying on the rocks if I was interested in coming down and taking photographs. Jannes had already spent some time watching him hunt and eat a cat fish. I rushed down and found him napping in his usual sandy spot on top of a boulder. The next two hours were magic: just me, just him and the blazing sun.

After a while of snoozing, I watched him roll, groom and mark his territory before sliding into the water. He was a local favourite as it wasn’t just me or Jannes or the Sea Change Project team, but many others had had incredible encounters with him. For some reason over the past couple of years this particular otter had lost all his fear of humans and even learnt to request food from the fishermen at Millers Point. He was often featured on various social media posts by different people who had encounters with him.

The favourite snooze spot. Photos by Swati Thiyagarajan.
Cape clawless otters are, for the most part, quite elusive, with their shy and wary nature. They are most active around dawn and dusk, and sometimes later into the night in a bid to avoid people. Hidden camera trap footage has shown them moving about close to human activity but staying well out of sight. Indeed, other otters I have had the privilege to catch glimpses of have vanished like ghosts in seconds. But just as with us humans, otters are not a monolith and individuals have their own way of being and behaving. This particular otter made his presence well-known amongst the community of Simon’s Town in False Bay. What his reasons were, we don’t know, but perhaps he had experienced positive interactions with people, or maybe as he had became older and wiser he realised we were a potential source of food and suckers for cuteness. Whatever the reason, to be in the presence of a wild animal is a gift. To then have that animal cross his own personal barrier or space and approach you of his own volition with no food reward in sight is a bigger gift. To have it happen every time you encountered him was a beautiful miracle.
Jannes and Swati with the otter. Photos by Craig Foster.

Once lockdowns came into effect and beaches were closed during the COVID pandemic in South Africa last year, I assumed these encounters would stop. But surprisingly they didn’t, and I’d often see him in various spots along the coast while just walking. On several occasions, he approached me and reached out to touch or sniff my hands and feet while I would just sit very still. These special moments were a big part of how I got through last year.

Being someone who needs to be outdoors a lot and someone who along with the rest of the Sea Change Project team needs to be in the ocean, the lockdowns were especially hard. My family and friends are scattered around the world and not being able to see them while worrying about their health and COVID has been very stressful. This otter and wild animals like him kept me going. They felt like my extended wild family. The hard lockdown which enforced strict curfews seemed to offer more space to wild animals, and I started to see caracals appear more often in the area, and watched with awe as the killer whales, Port and Starboard, ventured right into the shallows of the kelp.

From my home I watched the free-wheeling sea birds, the sparrow hawk, jackal buzzard and the peregrine falcon swooping and hunting, and noticed the rock pigeons who were trying to unsuccessfully build a nest on my deck roof, along with the starlings who harassed them. I watched the sun birds, the sugar birds and the mouse birds, each coming and going as the seasons changed. My extended wild family filled me with the joy I felt leaching away every time I thought of the toll the virus was taking on South Africa and the world and the hardships people were facing. We are in 2021 and with the new South African strain of the virus making the world nervous, I am still unsure of when I will see my family and friends. So having the wild outside my window has comforted me through a few bad moments.

For hundreds of thousands of years, access to the wild was our birthright, the birthright of every human on the planet. Indeed we were part of the wild. We still are, as no matter how technologically-driven and ruled we become, we are still the human animal and this biosphere is home. It has now been proven through multiple peer-reviewed studies that just fifteen minutes in a forest or a beach or even a green park brings us extraordinary benefits. It calms our minds, reduces stress and puts us in a happier state of mind. One study found that people living near trees had better ‘amygdala integrity’ making them deal with stress better. Another study found that areas with more greenery, and more trees reduced crime statistics. Research shows that trees seem to exude compounds that actively help with immune system repair. In Poland in the winter one study found that just gazing at even a bare tree in a cold winter setting makes people feel better. It’s an intrinsic connection that speaks to our biology as the human animal.

We call her Mother Nature because essentially every human on this planet is in a life long gestation. Just as a baby in a womb is kept alive through the umbilical cord which is dependent on the health of their mother, we are kelp alive through the umbilical cord of the biosphere dependent on the health of the planet, our mother.

For hundreds of thousands of years, access to the wild was our birthright, the birthright of every human on the planet. Photos by Craig Foster and Faine Loubser.

Some weeks ago, I was in the De Hoop nature reserve two hours from Cape Town with some of my Sea Change Project colleagues watching in wonder as a raft of otters swam through the vlei. The setting sun gilded the water as flamingos and pelicans winged their way to their resting places.

I received a message from Jannes at that moment. The wonderful wild otter who had given me so much joy over the past year had been found dead. There were no attack marks on his body and his death seemed quite natural. We had suspected that he had been getting on in years and so while I felt very sad I was not shocked. My last encounter with him was near the Millers Point Boat Club. We nearly walked past him lying on the grass until he gambolled over to Craig, my son, and I. He proceeded to sit right in the middle of us after nudging my hand with his head and then he and I lay together as usual, this time on the concrete slip way. His precious presence was a particular comfort as we had entered a new year in yet another lockdown instead of a new beginning. Staring into his eyes, I felt a great surge of hope, if this wild animal could trust me and lie so close, believing in the fact that I would never hurt him, then I had to trust that as a species we will find a way to heal and help each other.

Remembering these moments as a joyful raft of otters swam out of sight in the gathering dark and I gave a silent thank you for having had my local otter’s joyful presence in my life. I also gave thanks to all of the wild wonder around me. I personally promised to do better. Make better choices. We owe it to all of the wild and wonderful beings we share this world with. 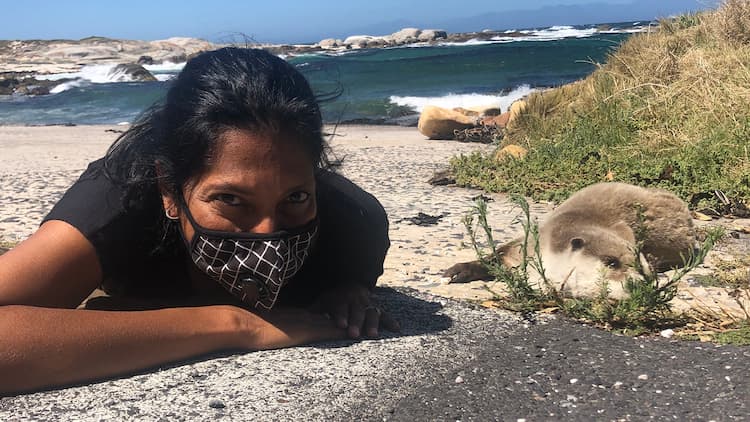 De Hoop Vlei. And my last encounter with our local otter. Photos by Swati and Tom Foster.

“Man must be made conscious of his origins as a child of nature. Brought into the right relationship with the wilderness he would see that he was not a separate entity endowed with a divine right to subdue his fellow creatures and destroy the common heritage, but rather an integral part of the harmonious whole. He would see that his appropriation of earths resources beyond his personal need would only bring imbalance and beget ultimate loss and poverty for all.”

It is in the strong words of ‘appropriation of earths resources beyond his personal needs’ where the solution lies and where we have to exercise our greatest behavioural change. And it is in the words that ‘man must be made conscious of his origins as a child of nature,’ where the inspiration and impetus for that change lives. We need to become the Sapiens we are called, a word that comes from old Latin word meaning ‘wise’.
Share this story
Facebook
Twitter
Email
Join the Sea Change Community
PrevPreviousRe-searching the Hermit Tanaid
NextWhales, Life and DeathNext
Top
QUICK LINKS
Menu
CONNECT WITH US
Icon-facebook Icon-instagram Icon-youtube-play Icon-mail
MAKE A DIFFERENCE
DONATE
GET THE LATEST NEWS
SIGN UP
© 2021 Sea Change Trust
Terms of Use & Privacy Policy
Site Design & Development
Icon-facebook Icon-instagram Icon-youtube-play Icon-mail
Menu
Support Sea Change Project
Donate

be first to receive our stories

By signing up for the newsletter, you agree to the Terms and Conditions.